These videos explain the stair nosing standards and  the BCA regulations in regards to stairway construction.

Patterned floor finishes and stair nosing. What is best.

DDA Disability Standard on Access to Premises the Premises Standard Legislation.
The Disability Discrimination Act (DDA) enacted by parliament does not include technical specifications for stair construction that can be used to check for compliance.

The Commission has given advice and guidelines to many industry, community and government bodies.

The DDA have been working with the Australian Building Codes of Australia Board (BCA) to develop a DDA Disability Standard on Access to Premises known as the (Premises Standard).

This put simply is no one can discriminate against those with disabilities when it comes to equal access to premises.

The”Premises Standard”, will provide architects, builders and certifiers with design and construction specifications which will meet the requirements of both the DDA (the Government Act) and BCA.

Why do we need to comply?

Haven’t you noticed that over the last few years, lifts have been appearing in buildings, when back in the 1970’s if you were unlucky enough to live on the 5th floor you had to hike it up the stairs?

Specially designed ramps for wheelchairs and those that need assistance to walk have appeared everywhere in new buildings when gaining access . They have to be designed in a special way, such as the gradient of the slope.

When you step off a set of traffic lights at a pedestrian crossing , there actually is no step, it is a wide ramp with tactiles on it, wide enough for a wheelchair or a motorised scooter to have equal access to crossing a road.

The DDA in passing their Access to Premises Standards had a good hard look at stair nosings, tactiles, bollards, and discovered that they completely discriminated in most part to the visually impaired.

Stair nosings are not just meant to aid the visually impaired, they are a major slip deterrent so common sense must prevail.

The Australian Standard (The Premises Standard) put forward by the DDA has no compulsory power, but the Building Code of Australia (BCA) has accepted this standard put forward AS1428.1 and has mandated compulsory compliance with that Standard.

This is now enforceable by law on new building sites and major refurbishments. It is not retrospective; UNLESS the stair structure undergoes structural changes.

It is very important to note that using the excuse that my building was built in 2001 means I don’t have to install stair nosings is incorrect.

When did the manufacturers have to comply?

Some stair treads and stair nosings were “tiger striped”. This means that the contrast luminescent strip which must be 50 mm is not in one colour. 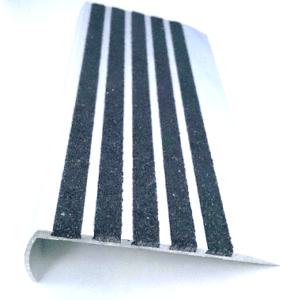 One could definitely argue that they do not comply post 2009.

Many manufacturers and those that had stock such as ourselves, were caught out and had to comply and throw out our nosings that did not have a 50mm insert

What if my stairs were already built prior to 2009?

If your stairs were built prior to 2009 then you do not have to replace the stair nosings.

If however you are doing a refurbishment, then you are required to comply with the AS1428 2009 standards

1 Stairways
11.1 Stair construction
Where required, stairs shall be constructed as follows:

As you know the Disability Discrimination Act (DDA) does not include technical specifications that can be used to check for compliance, as the DDA does not set up regulations but is only an advisory body.

Never the less the BCA does require compliance

Did you know the first standards was in 1998?

In 1998 the BCA bought out a checklist for compliance. Remember the BCA mandates compulsory compliance with the Standard. It was as early as this that they stated that each stair had to have a strip of contrasting colour at least 25mm wide on the edge of the nosing.

Eighteen years later we now walk around on old stairs that have faded white or yellow paint on the edge with crumbling stair edges!

What are some examples of luminance contrast?

The highlighted nosing is used to indicate the location of the nosing or leading edge of the tread to ensure safe movement up and down the stairway by all members of the community. 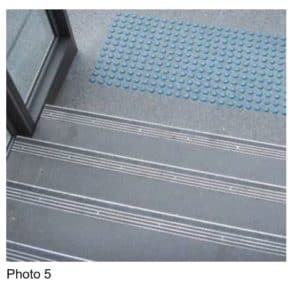 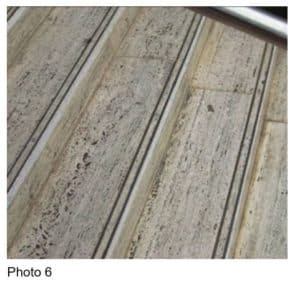 Luminance Contrast in the AS1428 2009 Stair Nosing Standards

Is it ok to purchase "Tiger Striped" stair nosing??

I am finding that the industry still likes to look of the tiger striped stair nosing. The standards ask for a “solid” colour which

implies one colour not many or striped, as vision impaired people need to see a solid band of colour.

What are some bad examples of luminance contrast?

What are some good examples of luminance contrast?

In this picture the following applies: 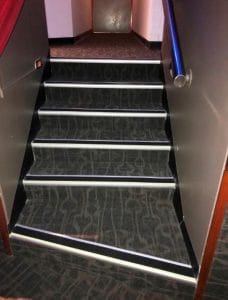 The contrast strip is black, and does not extend down the face of the riser

Let's talk about the 10 mm stair nosing riser or face

Everybody including manufacturers believed that the 10 mm riser/face meant that you could no longer install nosings that had for example a 25 mm face or a 30 mm face.

The standards state the following:

The image below shows that the grey contrast does not extend down the riser. 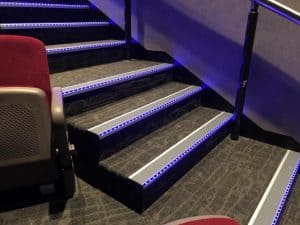 Is it OK to have nosing with a riser that is bigger than 10 mm ? Yes !

Yes absolutely, as discussed before the standards state quite clearly.

REMEMBER: Clause 11 of the Standard specifically addresses requirements for stairways and stair nosings and in this regard focuses almost entirely on promoting luminance contrast at the leading edge of step treads together with the avoidance of overhang at the front of stair treads. 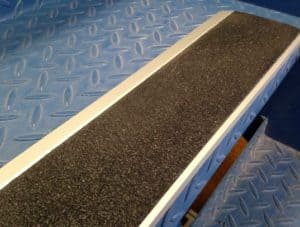 People have to lift their feet high enough to place on the tread.  The body of the stair nosing, so long as it is clearly differentiated from the luminance contrast strip, can extend to any depth on the riser

Where can I install a stair nosing with a riser bigger than 10 mm ?

Everywhere. The stair nosing with a 10 mm face are more aesthetically pleasing. On porcelain, ceramics, terrazzo we install a lot of 10 mm profile because they look nice. 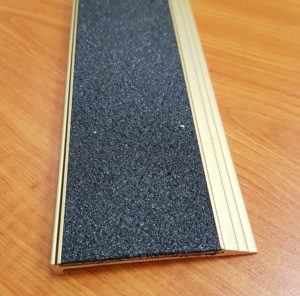 BUT it is all about safety, so what looks good and what is safe should be the rule.

This nosing in anodised gold with a 10 mm face and a P5 slip rating looks great, and when installed on level hard surfaces is excellent

You can clearly see that these two 10 mm stair nosings would not be safe on a concrete aggregate paver.

This was never meant to be the case.

This is correct. This shows clearly the leading edge of the step. The contrast is more than 30% and the strip is 50mm

Will an engineer certify nosings that have a 25mm , 33mm, 35mm face/riser?

Yes. One should have this discussion with the architect, surveyor to ensure everyone understands the AS1428 2009 standards. Safety is paramount.

Remember it is about luminance contrast not the size of the riser.

What is so important about an opaque riser? 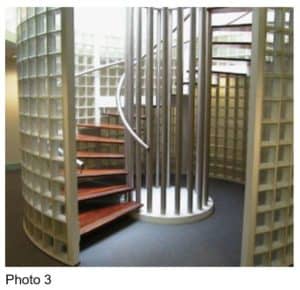 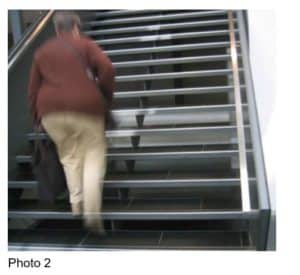 Opaque risers are no longer compliant and are very dangerous.

The standard states no open risers therefore opaque and no protruding or overhanging treads.

Open risers in stairways cause particular access difficulties for people with a vision impairment, especially if there is a light source coming from behind the stairs. Open risers or overhanging
treads/goings that result in lips on each step also make upwards movement very difficult for people with mobility disabilities who are able to use stairs.

Open risers can cause people with certain types of vision impairment to experience vertigo as they ascend a flight of stairs due to the strobing effect of the stair treads/goings and the light between each tread/going.